Conservative MPs were on Friday deeply divided by the prospect of Boris Johnson returning as party leader and UK prime minister — just three months after he quit following a string of scandals.

On Friday morning contenders to replace Liz Truss — who dramatically resigned on Thursday after only six weeks in power — were racing to secure the required support of 100 MPs to stand in the contest.

Although former chancellor Rishi Sunak and Commons leader Penny Mordaunt are both expected to stand, no one has yet launched an official campaign.

The contest to become Britain’s fourth prime minister in four years has been accelerated to take only a week. Under the new rules, no more than three candidates will be able to reach the first ballot on Monday afternoon, with the final two put to an online vote of party members for a result by next Friday.

A running tally of MPs’ support for potential contenders by Sky News put Sunak at 42, Johnson at 37 and Mordaunt at 16.

The MPs supporting Johnson — led by trade minister Sir James Duddridge — have been quick out of the blocks in an attempt to build momentum. Tom Pursglove, MP for Corby, said: “Voters had their say in 2019, Boris Johnson won an overwhelming mandate . . . many of our supporters felt let down when he was removed and will arguably feel cheated again if he isn’t on the ballot.”

The former prime minister is still popular with grassroots Tory members, but there is no guarantee that he will reach the tally of 100 MPs needed to get on the ballot. He is thought likely to cut short a family holiday in the Caribbean to decide on a potential comeback.

Many Tory MPs are horrified at the idea of Johnson coming back so quickly after scores of ministers resigned in July to force him out of power.

Sir Roger Gale, a veteran MP, told Times Radio that he would quit if Johnson returned. He also pointed out that the Commons privileges committee has not yet concluded its investigation into whether Johnson lied to parliament about parties in 10 Downing Street during Covid lockdowns. “Until that investigation is complete there should be no possibility of him returning to government.”

John Baron, another long-serving Tory MP, said he would find it “impossible” to serve under another Johnson administration.

Supporters of Sunak said that he would be the right prime minister to restore the Tory party’s economic credibility after weeks of turmoil in the financial markets triggered by Truss’s catastrophic “mini” Budget in late September.

Dominic Raab, former deputy prime minister, called on colleagues to back Sunak. “He has the plan and credibility to restore financial stability, help get inflation down and deliver sustainable tax cuts over time,” he said. 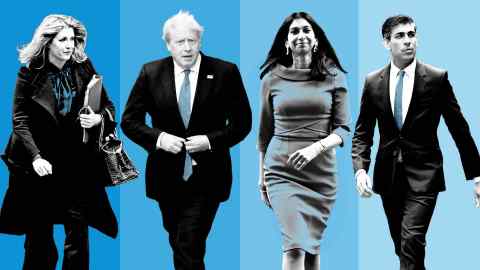 Allies of Johnson have privately approached Sunak to join forces, despite the latter having been one of the ministers who forced him out. But Sunak’s supporters argue that he can win on his own without cutting a deal with either Johnson or Mordaunt.

Meanwhile a poll by People Polling put the Conservative party at its lowest-ever support since modern polling began, at 14 per cent against Labour’s 53 per cent.

Gilts and sterling came under renewed pressure on Friday as markets grappled with uncertainty over the UK government’s plans. The 10-year gilt yield rose by 0.12 percentage points to 4.02 per cent, reflecting a fall in price. The pound was 0.8 per cent lower at $1.1149.

Economists at ING said there was a risk that the candidates to replace Truss did not back chancellor Jeremy Hunt’s U-turn on tax cuts — which have reassured markets this week — or that the government’s fiscal plan is delayed beyond October 31 by the leadership contest.

“Investors may begin to question whether a fiscal plan can credibly be delivered a matter of days into a new prime minister’s tenure, with a set of measures that have been crafted without their input,” ING said.